Subaru Telescope and its instrument are, like those at many other observatories, controlled by operator and observer sitting in front of computers at the control room in the building next to the telescope enclosure. In some cases, they are operated even from the National Observatory of Japan in Mitaka, Tokyo. PFS is not a single-component instrument but an integration of a few subsystems that are distributed on and around the telescope as shown below: Prime Focal Instrument at the prime focus, Metrology Camera System at the Cassegrain focus, and Spectrograph System on the 4th floor of the dome building. Infrastructures such as networking and computing devices are therefore the key to PFS operation with its subsystems and the telescope orchestrated. 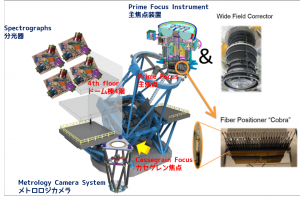 Kavli IPMU has the responsibility to prepare such infrastructures and develop software modules for the PFS subsystems and the Subaru telescope to talk to each other. In the course of these activities, we carried out a few tests to confirm the performance meeting our requirements — for example, network connection test at Subaru we posted before is one of them, and testing continuous large-volume data transfer is another one. 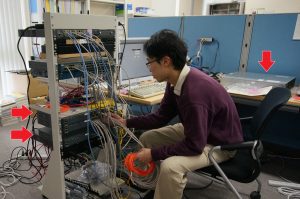 On 9 March 2017, we had a meeting for Subaru staffs to review PFS instrument control design and infrastructure. We requested the review meeting at this time envisioning timely deliveries of the devices in advance of the commissioning of the spectrograph clean room and Metrology Camera System later this year. In the review we explained quite a few things starting from the PFS operation concept and requirements to the infrastructure, then our choice of devices, implementation plan, performance test reports, shipping list, and so on. In addition, we discussed interface issues between PFS and Subaru which we will continue to collaborate on.