is one of the PFS instrument subsystems under development by ASIAA (Academia Sinica Institute of Astronomy and Astrophysics, Taiwan). This is a small telescope system installed onto the Cassegrain Focus at the bottom of the Subaru telescope to look up the Prime focus, take the image of approximately 2400 back-illuminated fiber spots in one exposure with the large format CMOS sensor (8960 pixels x 5778 pixels), and measure their centroids.

Since we showed development of Metrology Camera System about one year ago, ASIAA have finalized the design with some updates, assembled the individual parts into the system, and now they are testing its performance, such as image quality, centroid measurement accuracy & speed, and their stabilities, by putting Metrology Camera System on a tiltable test stand. 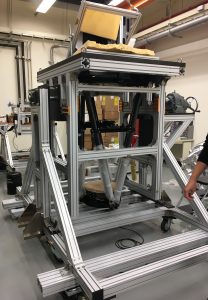 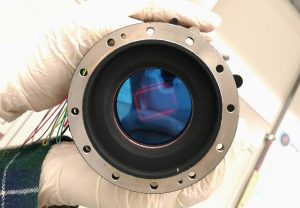 Software components are also crucial during this integration and test process: They need to be validated as ready for integration in the PFS software architecture. Also, well-matured software accelerates the integration and test process. From 22 to 26 January 2018, software engineers working for the instrument control had a face-to-face meeting in Taiwan, with multiple scopes: Discussing the readiness of individual software components for Metrology Camera System, discussing their readiness for integration with the PFS software architecture, and developing the level of commonality across different subsystems. To this meeting, we therefore invited software engineers of Princeton University and LAM (Laboratoire d’Astrophysique de Marseille), who have been working for the integration and test of Spectrograph System. The meeting was held in an informal style to accommodate actual works and a lot of interactions with the participants from ASIAA and the project office. 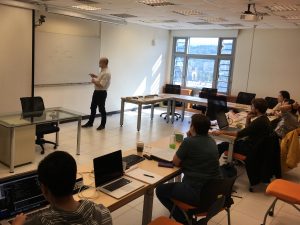 ASIAA will continue the integration and test processes in both aspects of hardware and software, aiming at the delivery of  Metrology Camera System to Subaru in a couple of months.