One of the unique features of the PFS instrument is its multiplicity: Using 2400 fibers, a number of spectra of stars and galaxies can be obtained simultaneously. The actuator named “Cobra”, which is comprised of two motors, is used for moving each fiber to the position of an astronomical object of interest on the focal plane. The “patrol area”, where each fiber attached to Cobra can move around, is limited nearby Cobra itself, but by populating the fibers and Cobras on the focal plane rather uniformly, we can cover the entire field of view for observation.

Having repeated prototyping, testing, and design updates for several years, we are now having the actuator which not only meets functional and performance requirements but also have long life time. Because we will operate 2400 Cobras simultaneously in real observation, we are also testing them not only individually but also with them integrated into a module. The picture below shows the module under tests in the designated room cooled down to -5 degC (23 degF) simulating a similar environment to that at Subaru Telescope. 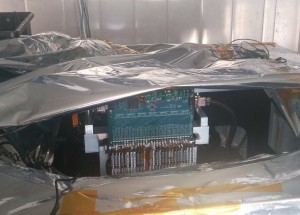 (The experiment under cooling chamber)