The PFS Science Team has established a working group for each scientific objective and has vigorously discussed what interesting science cases are to exploit the strengths of PFS and how we optimize the survey observation accordingly (visit our past post and our official web site for more details about science objectives of the project). Based on these discussions we have developed an observation proposal and currently are revising it taking into consideration opinions not only from the PFS team members but also from external experts. One of the important issues to be addressed in the future is how to integrate three different science themes into one coherent observing program in the proposal. In addition, how to efficiently observe various target galaxies and stars in different areas on the sky at different times on different nights is one of the major challenges. 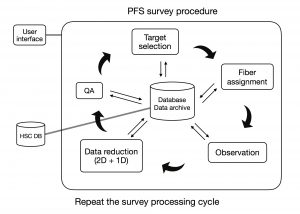 Schematic view of the PFS Survey processing:
The survey proceeds on the cycle of target selection, observation, and analysis.

We launched the “Survey Integration Team” last year and have been discussing the importance of the three science themes and the integration into a single survey plan at the next step. We review the previous draft of the observation proposal and present revisions as “homework” to each working group as necessary. We are also currently conducting survey simulations to see whether the survey observation for 300 nights in total is actually possible, by integrating candidate targets presented by each working group. 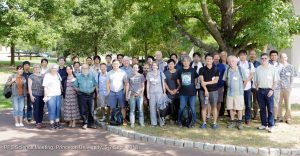 Group photo of the meeting

In the PFS project, researchers from the Science Team gather once a year or so and hold a meeting to focus intensively on the scientific objectives and the survey planning (see our past post). From September 5 to 7, 2018, we held the meeting at Princeton University in New Jersey, USA (which appeared several times in this blog so far). We started this meeting with sharing the current status of the entire project and the development of the hardwares and software. Subsequently, we discussed the homework that the Survey Integration Team gave each working group so far and the future prospectives. We also shared the current status of the survey planning and simulations and discussed possible optimization in the future. 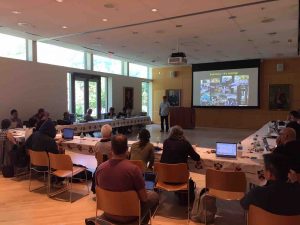 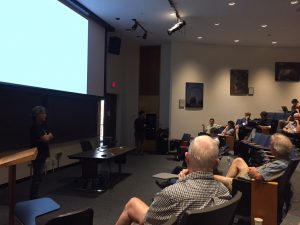 Snapshots of the meeting

Further studies on the topics discussed in this meeting will be made in more detail in each science working group. We are going to hold the all-hands collaboration meeting in Shanghai in December this year. Although only a part of the Science Team participated in the meeting this time, the further discussion will involve the entire collaboration including the Technical Team at the collaboration meeting. With a broader range of opinions considered, the final observation proposal must be more advanced and sophisticated.