We reported that Metrology Camera System had been installed to the Subaru Telescope for the test. MCS, however, is not the only instrument for PFS to have been installed to the telescope. The prototype fiber cable was also routed on the telescope to test the optical performance about a half year ago. The work was done a little long time ago, but we would like to report the installation work of the prototype fiber cable in this article.

In the PFS instrument, the light from the sky is fed to the one end of an optical fiber at the prime focus of the Subaru Telescope and is emitted out to the spectrograph modules from its other end. The spectrograph system is such a long distance away from the prime focus (http://pfs.ipmu.jp/instrumentation.html), that it is crucial to transmit the light in the fiber as efficiently as possible. Previously, we reported the completed integration of 50m-long prototype fiber cable that ranges from the telescope top-end to the clean room to accommodate the spectrograph system. In January 2018, we installed the prototype cable on the Subaru Telescope and tested its optical performance there. 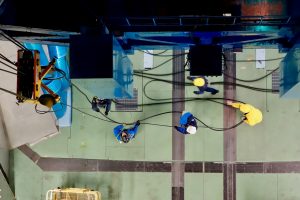 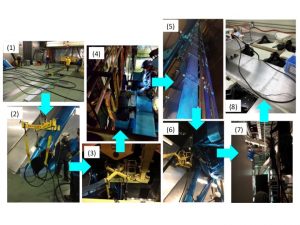 This installation work was carried out on Jan 30, and subsequently for the three days after that, the optical characteristics of the fibers in the cable were measured, with attempts to optimize the way of routing the cable. Through these processes, we managed to obtain not only important know-hows to install the cable but also valuable data about the optical performance of the fibers on the telescope. We will come back in the near future for further data acquisition and cable route optimization to prepare for the real cable installation.