One of the PFS instrument “Metrology Camera” was finally shipped from Taiwan to Hawaii!!

is an instrument used to measure the fibers position while we configure fibers to target objects. Academia Sinica Institute of Astronomy and Astrophysics (ASIAA) in Taiwan has the responsibility for Metrology Camera development, and they tested its performances before shipping in the last a couple of months (see the previous post for details). 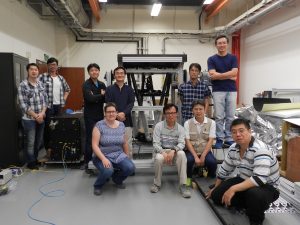 ASIAA finished the tests last month, and had a pre-ship review meeting with the Project Office and Subaru Telescope on 3rd April 2018. The review was successful, so Metrology Camera was packed and shipped to Hawaii on 13th April. It will be delivered to Subaru base facility in Hilo, where we will check if the camera has no damage during the shipping, and align the camera again if needed. After that, we will ship the camera to Subaru telescope at the summit of Mt. Mauna Kea, and carry out the final integration and tests in the dome. 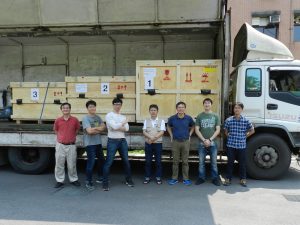 We hope Metrology Camera will arrive at Subaru safely.
一路平安! (Have a nice trip!)