It has been about 3 months since the first blue camera cryostat was shipped to France. In this post, we are showing the updates on development of the Spectrograph systems.

At Laboratorie d’Astorophysique de Marseille (LAM), we finished the performance test using only a red camera unit, and started fully integrating the first spectrograph module (called SM1). We have already accommodated the optical elements used for SM1 to the red camera cryostat (marked with red arrow in the below photo), and started the test of pumping and cooling. We also improved the software modules to operate the spectrograph module with more than one cameras. In short time the optical elements for the blue camera (marked with blue arrow in the below photo) will be delivered, and two visible-blue and red cameras will be completed. Other components for SM1 will be also delivered, and we will start integrating them. 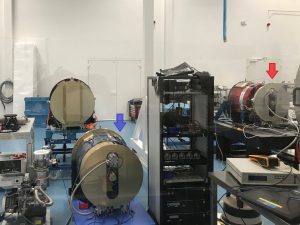 Camera cryostats under integration and test at LAM.  The cameras marked with arrows will be used for the first Spectrograph Module (SM1).

One PFS Spectrograph Module has 3 camera units. The other camera, near-infrared camera unit is under development by John Hopkins University in the United States.  Unlike the visible wavelength band, anything of normal temperature can be a light source on near-infrared band. Therefore, we are developing “thermal-cut filter” to cut off light whose wavelength is longer than a given wavelength, and “radiation shield” to prevent the infrared stray light and thermal radiation from coming onto the detector. 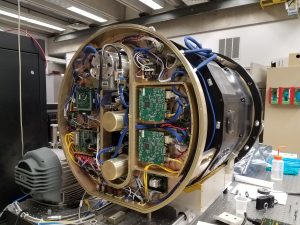 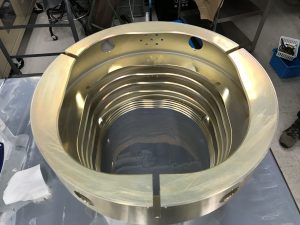 Also, Brazilian team is developing fiber slit assemblies. We have finished polishing the two sets of the slit. We will carry out the optical tests and then finalize the assemblies in the near future. After that, we will ship the one of the two assemblies to Marseille. 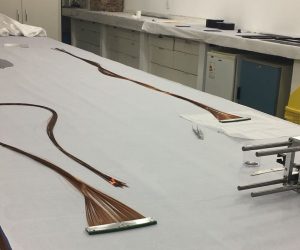