The PFS Science Team is now planning a large survey observation of the Universe using PFS. Three working groups have been discussing the plans to achieve their major scientific objectives: “Cosmology” research group to reveal the nature of dark matter, dark energy and neutrinos, “Galactic archeology” research group to reconstruct the history of the Milky Way Galaxy where we exist, and “Galaxy formation and evolution” research group to reveal the formation history of distant galaxies and their relationships to the surrounding environments. They are now trying to develop them into one coherent survey program and write a proposal with detailed plans of observation to be conducted in the framework of Subaru Strategic Program. If you are interested, visit our past post and our official web site where you can see more information of these topics.

From 7th to 9th in August, we had a meeting with some external members to review and discuss the planned survey program with particular attention to whether the objectives have been placed to be scientifically invaluable on top of the uniqueness of PFS, whether feasibility studies have been properly conducted, how the proposal can be further improved, and so on. Based on the outputs from the review, we also discussed future strategies to mature the proposal. The meeting was held at Max Planck Institute für Astrophysik (MPA) in Garching, Germany, where 50 people gathered and had lively discussions. 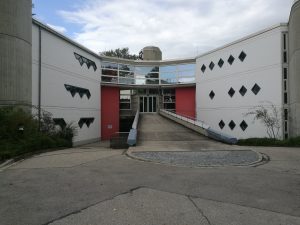 Thanks to the great efforts of the Science Team so far, we reconfirmed at this opportunity that PFS is a very unique and powerful instrument, and results expected from the planned survey will clearly be scientifically very important. But on the other hand, we also realized that there is much room of improvements in the current survey plan and proposal in such areas as the target selection, feasibility estimation, and survey simulations. We will update these studies based on the discussions at the meeting, formulate the details in the survey observation plan, and update the proposal accordingly.

In this meeting, a part of the Instrument Team also participated, and exchanged opinions with the Science Team about how the fiber allocation should be optimized, and how the science database should be developed. These are all tough topics of discussion but yet very important for the survey planning and processing. In observational astronomy, especially survey science using a large and sophisticated instrument like PFS, effective collaboration of the instrument team and the science team is indispensable. This meeting was indeed a glimpse of the way we are working hard together towards our common goal that is to unravel the mystery of the universe. 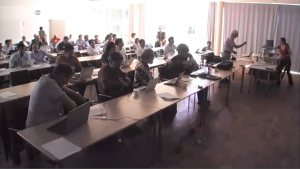 (Snapshot of the meeting)