Today we would like to introduce what we can study with PFS!

One of them is cosmology, in particular the nature of the so-called dark energy that is causing an accelerating expansion of the Universe. Its discovery earned 2011 Novel Prize in Physics. However, the discovery led to major new puzzles: why the Universe is accelerating and where does it lead us? Since Newton’s and Einstein’s gravity is known as an attractive force, gravity can only “pull” the expansion to slow down. Hence cosmic expansion is the biggest mystery in cosmology. What is “pushing” the Universe to speed it up? The PFS aims at measuring the history of cosmic expansion, from deceleration to acceleration era, with an unprecedented accuracy, forecasting the fate of the Universe and the number of its remaining years.

The second scientific objective is to reveal the earliest moments of the baby galaxies and how they evolved to the present mature Universe. It is well known that the Universe went through the dark ages, after the initial fireball of the Big Bang fizzled but before the cosmic dawn when the first stars were born. The way the primordial gas and first stars assembled into galaxies and their central supermassive black holes is still not understood. Furthermore, the galaxies underwent the period of active star formation, which mysterious shut off billions of years ago. The PFS instrument is specifically designed to study the history of galaxies in an uninterrupted way from their births to their midlife.

The third scientific objective is to understand the history of our own galaxy: the Milky Way. Combining with the data from the GAIA satellite that is being operated by the European Space Agency (ESA), the PFS instrument can map out locations and motions of millions of stars, revealing where they came from and how they were sucked in by the gravitational pull of the smaller Milky Way in the past. As if we reversely watched a movie, we can uncover the origin and formation processes of the Milky Way by studying the motions of stars of various ages in great detail. Furthermore, this study will give us a clue to the nature of dark matter, which should have played an important role in building the Milky Way. 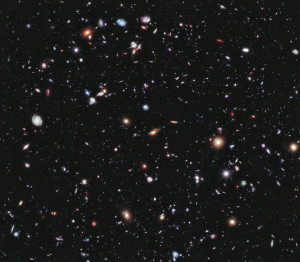