Among the PFS instrument subsystems, Prime Focus Instrument (PFI) is the one that is installed to the prime focus of the Subaru telescope. PFI accommodates various key components such as 2400 fibers and actuators to be configured onto astronomical objects, and cameras to guide the telescope and lock the instrument field of view to a target area of sky.

PFI parts will be assembled and tested at ASIAA (Academia Sinica Institute of Astronomy and Astrophysics) and their partner ASRD of CSIST (Aeronautical Systems Research Division of Chung-Shan Institute of Science and Technology) in Taiwan. We mentioned in the precious post that the test stage has been fully assembled in an environment-controlled chamber. While various parts and sub-assemblies are manufactured and tested at other places than ASIAA such as California Institute of Technology, NASA Jet Propulsion Laboratory, and Laboratório Nacional de Astrofísica (LNA) in Brazil, they are delivered to Taiwan for the next level of integration.

Recently, three parts named “Modular Plates” have been delivered from LNA. These plates are characterized by the features to hold and guide the fiber bundles securely at the right places in PFI. About 2400 fibers, i.e. 4 sets of 600 fibers going to each 4 spectrograph modules, are routed in the middle of PFI, from the focal plane at the bottom to the top. On the focal plane, the 4 groups of 600 fibers are interlaced one after another so that even a single spectrograph can  cover entire large field of view (see the four colored cables in the below figure). The modular plates are the key parts to route the fiber cables properly accommodating the interlace distribution on the focal plane. 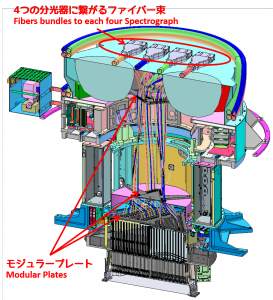 The plates will be fit-checked to the PFI frames, which are under development by ASIAA, and assembled after the fiber cables will be delivered. 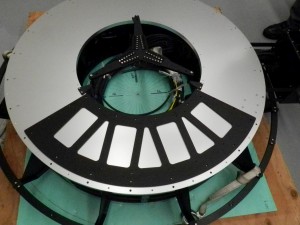 (one of modular plate with PFI mechanical parts)