At Laboratoire d’Astrophysique de Marseille (LAM), PFS Spectrograph Module (SM) is fully integrated and its performance is validated. As a part of these processes, two visible-red camera units are being tested; one is for thermal performance test and the other is for optical performance test.  From 19th to 29th June, we got together at LAM and dedicated ourselves to joint development works and discussions. The key members from John Hopkins University (JHU) and Princeton University (doing camera unit and control software development) and several staffs from the Subaru Telescope observatory and PFS project office participated on site, and not only spent time in the clean room but also had intensive round-table discussions about the strategy and road-map of development toward the delivery of SM to the observatory. 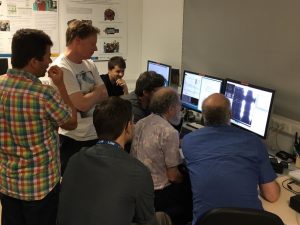 One key objective of this meeting was to discuss the long-standing issue of thermal performance: The cryostat has been designed and built to keep high vacuum (10^{-6} Torr = 2×10^{-8} psi) and low temperature (163 K = -110 degree Celsius) for detector operation inside, but unlike the intentions, cool-down tests revealed difficulties in keeping the detector temperature constantly low for a long time. From many discussions and additional experiments at LAM and JHU, we have internally come to a conclusion that the root cause of this problem is likely the residual small amount of water in the cryostat that condenses on cold surfaces and enhances the emissivity. In one particular session during this period, we yet again reviewed the experiments we had done so far with an invited external reviewer, confirmed our understanding of the root cause, and discussed next step for improvement and operation strategy to maintain the detector temperature. After these discussions, we moved to the clean room and started planned works right away. 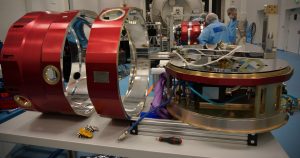 In addition, we have modified and updated the electronics assemblies to operate the cryostat, and motor assembly to precisely position the focal plane. These assemblies are developed by JHU and Princeton. 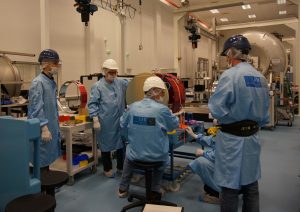 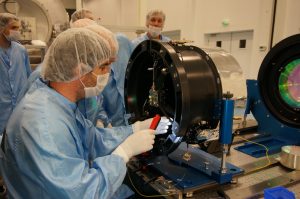 Left: The two staffs wearing a white hard hat are Dr. Stephen Smee (on the right) and Dr. Stephen Hope (on the left) from JHU, investigating the wiring of controller assembly.
Right: Dr. Fabrice Madec from LAM is investigating motors for positioning the detector focal plane.

Thermal performance and optical performance tests will be continued at LAM, and other components such as blue and near-infrared camera units will be integrated and tested in the future, envisioning the shipment of the first spectrograph module in the first half of next year.